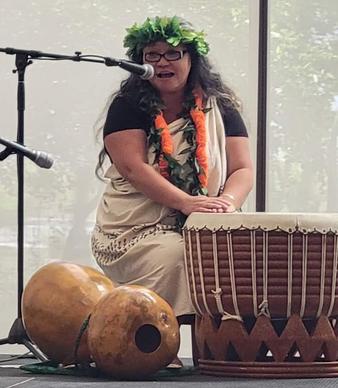 We offer virtual and live lessons in Hawaiian hula. See our live classes, enroll and pay here.  Our virtual video lessons are here.

Welcome to Kaimikahu Hale O Hula I Te Faʻa O Te Mahana. Kumu Kaimi Matthews Valdez, trained in both Hawaiian and Tahitian culture, was born in Honolulu, Hawaiʻi and started dancing at the young age of 3 under the direction of Kumu Hula Master and Composer John Piʻilani Watkins.  When her family moved to California in 1975, she continued dancing with Kumu Hula Naomi Leinaʻala Kalama and then at age of 5 began dancing with Kamo's of Hawaii, also known as Kamohai's Hula Halau, under the direction of Kumu Hula Joseph Kamohaʻi Kahaulelio.

When Kaimi turned 7, her passion and love for hula grew.  Uncle Joe recognized her knowledge and after ʻuniki (graduation), he decided she should open her own halau.  In 1979 she began teaching hula and Tahitian dance in her garage.  This was the beginning of Kaimikahu Hale O Hula; it was originally based in her hometown of Santa Clara, California, and eventually expanded into the Salinas and Sacramento areas.

In the summer of 1978, Kaimi entered Tahiti Fete in Sacramento where she placed first in her age category and took overall for the Wahine division.  She took the same title in 1979 and 1982.

In 1983, Kaimi moved back to the island of Oʻahu and took a break from teaching and attended Halau under the direction of Kumu Hula Maʻiki ʻAiu Lake and then under Kumu Hula John Keola Lake.  She also learned Tahitian from Tunui Tully.  In 1985 she moved back to California where she returned to teaching her halau again while also continuing to grow and enhance her skills at the same time under the direction of Kumu Hula Mark Kealiʻi Hoʻomalu.

In 1996, Kaimi’s family moved to Arizona where she resides and continues to teach hula and Tahitian dance and has been going strong for 25 years.
​